One of the mottos of "fysalida" is "movement inside and outside".

Focusing on movement and the need to make a statement about contemporary social and ecological issues, in the past 11 years I have chosen to create artistic works embracing a deeper philosophy of how everything can bring harmony.
Harmony between nature and human, between human and human.

After the dance-theater performance GAIA_be the bee at Cretaquarium in October 2016
https://vimeo.com/208035466
as well as various activist street art at central locations in the city of Heraklion
http://www.fysalidance.com/streetart.php?lang=el
in 2018 follows the production BE the TREE project, a modular project about nature and the quality of life in modern society.

BE the TREE project consists of:
- a series of artistic workshops and dance practices starting with research and exercising the concept of the tree as an idea, experience, need
- creation and presentation of artistic videos aimed at informing and raising public awareness about ecological issues
- tree mapping in the area of Agia Triada in the city of Heraklion, an act of care, respect and love for the environment
- street art performance with students at Georgiadis park in Heraklion town for the World Mother Earth Day, Sunday 22 April 2018
- dance performance with guest artists and colleagues from Greece and abroad
- solo performances

Reacting to the chronic and unfair cuts and abuses of trees on our island, and more specifically the lack of education and empathy about ecology and the environment, I often visualize the human body as a tree, wise and beautiful, with roots and fruit, soil and water, thoughts, memories and emotions that dance harmoniously together with the consent of all its leaves and branches in the space-time of our existence and coexistence in the universe.

With my friend and co-worker Zenia Drossou, we decided to dedicate about a month and a half to map the trees of the Agia Triada district in order to record information about the green areas of this region. Our desire is to become a source of inspiration for other people who would like to do something similar in other neighborhoods. As a result, we created a detailed record with photos and notes for all the trees in the district (in gardens and on the streets). In the same spirit of the artistic and human desire for expression and communication, the first video of the series Be the Tree project was realized in collaboration with Stella Meligounaki and Yorgos Mavromanolakis.

Our deepest desire and need remains to raise public awareness about nature and ecology, while our oxygen-deprived scream is transformed into the "common truth": We want TREES in our City!

According to the UN General Assembly in 2010: “The right to safe and clean drinking water and sanitation constitutes a human right that is essential for the full enjoyment of life and all human rights”.

However, more than one billion people, that is one in seven people on the planet, do not have access to safe drinking water.
“and we are all small islands of an aquatic planet”

Every day on this planet, approximately 2.000 children under the age of 5 die from diarrheal diseases and about 1.800 of these deaths are related to water and sanitation.
“and we are all small islands of an aquatic planet”

Every 22nd of March, World Water Day, we read, we get informed, we become aware, we are saddened by the statistics, we protest for the right to water, we proclaim that water is an unalienable public and eco good, essential for life, human society and ecosystems.

The dynamics of the course of events and of the whole situation shows anything but prudence. It rather shows contempt for all those “unquestionable” goods that for many people have stopped being unquestionable. Who would have expected that billions of creatures on this planet would be deprived of clean water and would bleed for a sip of “blue gold”? Who can believe that the next world war won’t be for gold, nor for oil or for food, but for water?
War for Water on the aquatic planet!

On this aquatic planet, from Chile and Bolivia to Didymoteicho and from Detroit to South Asia, water, that is considered by definition a “good”, is no longer a good. In this water crisis, the overconsumption in the Western world exacerbates the problem even more. More than 80% of the abstracted water around the planet is not efficiently used. It is just that we have learned to needlessly waste water, as the United Nations says.

“My known and unknown friend, that you were washing the sidewalks and the floors furiously, to clean them with water and chlorine, tell me now, what chemical will ever clean our soul for what we’ve done? But also for what we haven’t done?
And you that you have been washing for hours your new motorcycle, with soap and water, tell me now how difficult itis to clean your mind as well?
But also you that you were spilling bottles of water anywhere, or you were leaving the tap running and the hose neighing, spewing water, water for hours, endless hours, as if nothing ends…
And you that you concreted the river in order to build whenever you like or you closed the well for your own interest, and so on…”

And it is not only that. Over the last decades water has turned into a marketable product, often particularly expensive. It is estimated that 200 billion bottles of water are sold every year throughout the world, leaving huge profits to industries. The consumption of bottled water conceals another environmental and social risk: The commercial exploitation of the springs and rivers by the companies deprives precious water that could be distributed for free through the public water supply network. At the same time, the privatization of drinking water in various countries such as Britain, Canada, Australia, New Zealand, Chile, Bolivia, Argentina, Morocco and South Africa, led to a decline of its safety and quality, abandonment of water distribution infrastructure, increase of tariffs and of households that face water cut offs, and finally, to social uprisings.

Water is privatized; it becomes a marketable commodity and is priced while the water stocks decrease globally. The only winners will be the large multinational corporations. We all become scapegoats for their own profit.

Really, for what profit we are talking about, now that our lives are in danger? We forget that the amount of water on the planet is fixed, doesn’t increase and is only recycled? We forget that pollution makes its renewal frighteningly difficult?

The primary and most precious good, the source of life, the most important component of the human organism and generally, of all the animal and plant kingdom, deity in the mythology of all cultures with its inner healing power, bound to the history of mankind and the life on Earth itself, Water, is threatened from all sides. No living being on this planet can live without it.

Water is here before us, since always, it has a life and memory, changes shape and form, flows, creates ecosystems, even from nowhere! It’s inside and outside us, everywhere, but not forever!

“and I’m afraid that soon, in our times, the only liquid element that I won’t pay for, will be my tears and their saltiness, which will be chasing every time I silenced and every pillage that occurred and I stayed indifferent…” 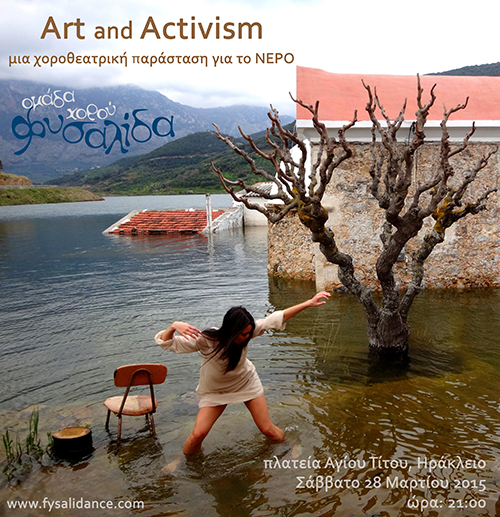 In March 2013 ‘Fysalida’ made an open call to attract participants for the group’s next street art action, dedicated to the International Dance Day. Shortly after, a team of people was formed who shared a common interest for the call, their love for movement, dance and... freedom!

On April 29 we danced in one of the most central squares of the city of Heraklion, Freedom Square, under the subject of what else but the freedom! Freedom of movement and expression!

Freedom, a concept that bears numerous definitions and meanings, but only one true, embodied by each one of us: a concept that inspires, provokes, motivates and… invites us all to ‘dance’ with it.

To move and express ourselves! 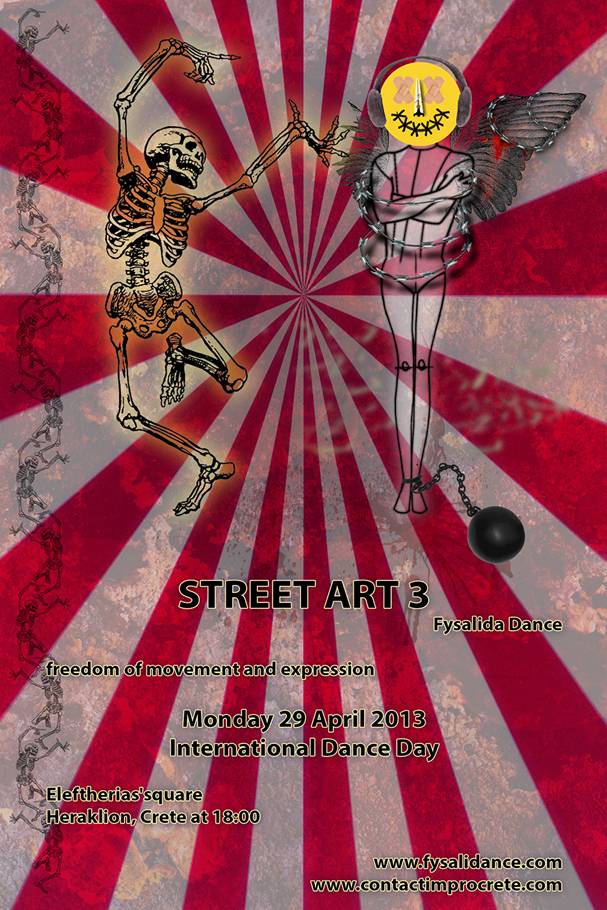 Moving inside and outside, the Fysalida Dance is taking to the streets again, this time looking at a very critical issue on which the fate of society hangs. Dance and activism meet and mingle, coming together to confront the planet's most dangerous enemy: Man.

Οur question: Why does Crete 'have' to become an ‘electric island’?
We don't want to become trapped in that frantic race!
We want to adopt new values and a new direction.
We have a different perspective on ‘development’.

Development equals quality of life, self-determination and protection of our living space, the right to joy and above all the right to live in harmony with nature and to enjoy its bounty. We want to decide how our vital natural resources will be managed. 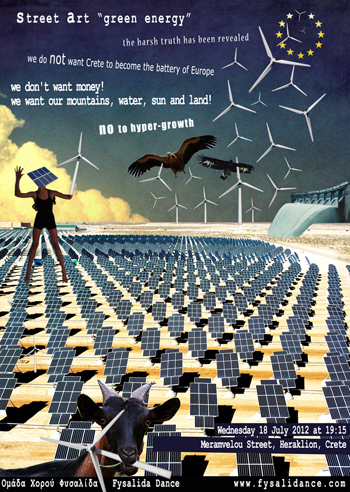 For the 1st of April 2012, Fysalida Dance focused upon the 1st of April's custom concerning the jokes with lies. Fysalida took this 'custom' that many different European Cultures share and enlarged it into a brain-storming of thoughts, movement, sound, feelings and passion for the... 'truth'.

On Sunday the 1st of April 2012, we all danced our sorrow for the socio-political situation a lot of countries 'live'. This was an honest comment and an 'activistic' action that was performed by every-day people and was expressed through movement, dance and theatre outdoor in a central street of Heraklion town in the island of Crete.

All of us performers, we simply wanted to state our disagreement to the unfairness that 'governs' our lives in a very immoral way. Immoral against the planet, the society, the people, the nature. This was and is our truth.

We would like to wish all to: Search for the Truth in our own Hearts!
And let's not forget that: "One constructs truth in the same way one constructs lies."
by Odysseas Elytis